Editorial: The death of MySpace? 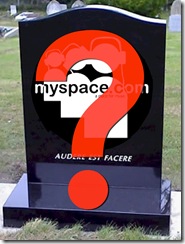 The answer is clear: use more than one.

MySpace is in imminent demise, according to Webware CNET News (News Corp. to MySpace: Time is running out).

For years, MySpace has been the de facto, free, online, playable-music-files web service of choice for musicians to share their work with fans. Even artists with their own personal and professional websites maintained a MySpace page to direct listeners to their links. But since its acquisition in 2005 by News Corp., MySpace, even with 100 million worldwide users, has lost ground to Facebook (five times as many users) and Twitter (twice as many).

So what’s an artist to do? END_OF_DOCUMENT_TOKEN_TO_BE_REPLACED

A killer app for aggregating several independent artists and streaming their original music is sure to shake up the old guard, in a way that provides appropriate returns for the artist, and without killing the host!

Recently Mashable reported on Dalton Caldwell’s presentation to the YCombinator’s Startup School at Stanford University, featuring several startup experts, including Mark Zuckerberg of Facebook.  The speakers were invited to share their own startup story.  The Mashable headline is what grabbed my attention:  Are Music Startups Destined to Fail? END_OF_DOCUMENT_TOKEN_TO_BE_REPLACED

The best music listener website features don’t all exist on a single website–yet!
By Teddi Davis

FreePlayVL last reported on musician’s assessments of the what and the why of the best music aggregator websites as captured in our survey–but what about what listeners want?  Starting with the websites that musicians liked the most, this article dissects various functionality across these websites to identify what features are essential for the perfect music website from the music listener’s perspective. END_OF_DOCUMENT_TOKEN_TO_BE_REPLACED

So what makes for the perfect listener and artist website?

iTunes has fundamentally changed how music is acquired and consumed, starting a digital music revolution.  With a big chunk of the music loving public moving online to satisfy their music needs, the Web is proving fertile ground for finding and learning about great new artists.

ReverbNation.com was cited most frequently by artists responding to a recent survey END_OF_DOCUMENT_TOKEN_TO_BE_REPLACED

He had planned to give himself a one time guilty pleasure of recording a CD and then get on with life.  As a result, he met his future band mates, and The Indulgers were formed.  McCarron hasn’t looked back. By Teddi Davis

I sat down with Damien McCarron recently to discuss how he uses digital technology in support of his two music ventures:  The Indulgers, Colorado’s premier Irish rock band, and the newer Irish/Celtic/folk trio, The Wild Mountain Celts.

I was already a fan.  The Wild Mountain Celts have been playing a monthly gig at my pub, The Exchange Tavern, for the last year and a half.  I was hooked on the music, but had also come to recognize Damien’s skill as a spokesperson, using the Internet to promote, and connect with fans.  Given his expert use of digital assets, I wanted to know what he thought of the virtually live music scene. END_OF_DOCUMENT_TOKEN_TO_BE_REPLACED

What is it about a well-interpreted cover performance that energizes a crowd?  And does it help or hinder the relationship the artist is trying to build with the audience? By Teddi Davis

“The whole thing about taking an English-speaking artist to Japan, via virtual reality, at a Tokyo campus of a Philadelphia university…  It’s like place and culture don’t matter at all, isn’t it?” Jean-Julien Aucouturier

Students learned not only fundamental musical digitization skills but also how to put them into action by developing a new channel for a real musician.

Learning is a funny thing.  While it’s possible to prepare to learn by studying, raw knowledge doesn’t stick or become whole without being put into practice.  The best way to learn, then, is by doing.  That’s also how to set about doing something that’s never been done before. END_OF_DOCUMENT_TOKEN_TO_BE_REPLACED